Just two months out from the 2020 election, business owners and investors are beginning to pay more attention to potential 2020 outcomes. With Senate swing states in play, the range of outcomes is as large as ever.

Looking back at the 2016 election, what can we learn from the market and the impact of election results?

Founder of the $151 billion hedge fund, Bridgewater, Ray Dalio is one of the most famous hedge fund managers of all-time. Since 2006, his hedge fund’s signature strategy—The All Weather Portfolio—has outperformed the S&P 500 with its 8% annualized return, gross of fees.

Approaching the 2016 election, Dalio’s fund predicted a -10.4% loss in US stocks should then candidate Trump win. Forecasting Trump’s anti-globalization rhetoric, they further predicted international stock markets to fall even further.

In an effort to hedge their predictions, the team at Bridgewater wrote “We are global macro investors, not political experts.” This line serves as an important reminder that global economies and presidencies are not related, as many investors would expect.

While the President doesn’t have an impact on stock market returns, the gloom and doom prediction by one of the world’s best hedge funds was simply misguided. For investors, they must ask themselves how likely they are to avoid the mistake made by a $151 billion hedge fund with decades of investment experience and teams of PhD's.

For investors, they must ask themselves how likely they are to avoid the mistake made by a $151 billion hedge fund with decades of investment experience and teams of PhD's.

If this same team of 1,500 employees was unable to correctly predict the impact of the election, investors are best served to keep their eye on achieving short and long-term goals through a well diversified portfolio of stocks and/or bonds.

Does “The Market” Even Know?

It was 12:10AM ET on the morning of November 9th and stock market futures were tanking. Futures fell so much that they reached the Dow Jones Index hit trading-loss limits of -5%.

At around the same time, billionaire hedge fund manager Carl Icahn decided to buy $1bn in stocks. Expecting a reversal in stock market futures, Icahn believed even “The Market” was wrong.

In the FT’s article about that election night, they wrote:

“Around the world, investors were scrambling to understand what one of the most sensational upsets in US election history meant for their own markets. But Mr. Icahn was so sure that Mr. Trump’s presidency would be a boon to the economy that he called his brokers and placed an audacious $1billion bet that the stock market would recover from the fright.”

Mr. Icahn was nearly immediately proven right as futures began to rally off the trading-loss limits. By Trump’s 3AM victory speech, most of the losses had been recovered. 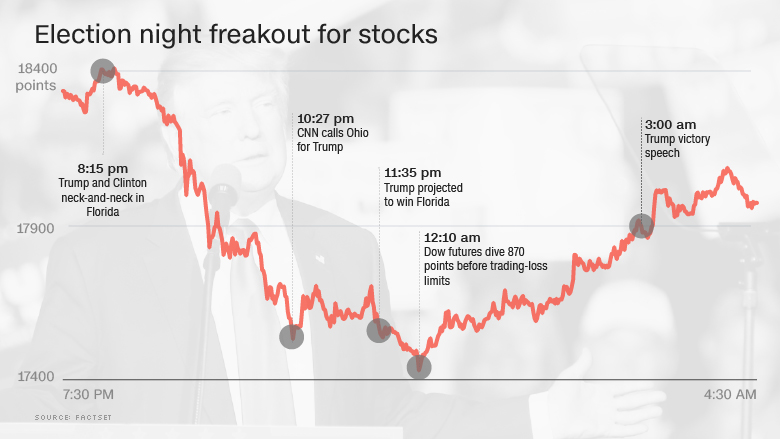 The following day, markets continued their march to finishing November 9th’s trading session up 1%. This 6% reversal from pre-market lows shows just how confident traders and investors were of the impact a president could have on the stock market.

Also, the stock market increasing by 1% is not all that remarkable. As noted by the FT, “For the most part, US presidential elections have not proved major events for the markets.” Even in the election of a political outsider like President Trump, the stock market’s 1% reaction a day later can be surmised as “Meh.”

'For the most part, US presidential elections have not proved major events for the markets.' Even in the election of a political outsider like President Trump, the stock market’s 1% reaction a day later can be surmised as 'Meh.'

For entrepreneurs following the markets, there was still the intermittent crash and rebound that led the news. Yet these stories miss the greater point that markets can be indecisive themselves. Strong, significant reversals, such as the morning of November 9th, prove this point.

Learning from the 2016 election, we see that legendary investors were both right and wrong. Yet for business owners, the 1% market move didn’t even move the needle on their net worths. It’s better to remain focused on what we can control--our emotions.

This election season will prove to be headline worthy with the candidates’ quotes and accusations. Grand plans for rebuilding infrastructure and communities will be unveiled to much fanfare. Nonetheless, the 2016 election proves that yet again, politics and portfolios should remain separate. Their separation removes emotions from investment decision making and allows for investors to remain level-headed throughout the uncertainty stemming from an election.

This report was prepared by Delta Wealth Advisors, a federally registered investment adviser under the Investment Advisers Act of 1940. Registration as an investment adviser does not imply a certain level of skill or training. The oral and written communications of an adviser provide you with information about which you determine to hire or retain an adviser.

The information herein was obtained from various sources. DWA does not guarantee the accuracy or completeness of information provided by third parties. The information in this report is given as of the date indicated and believed to be reliable. DWA assumes no obligation to update this information, or to advise on further developments relating to it.

The mention of specific models or funds is not to be considered a recommendation.